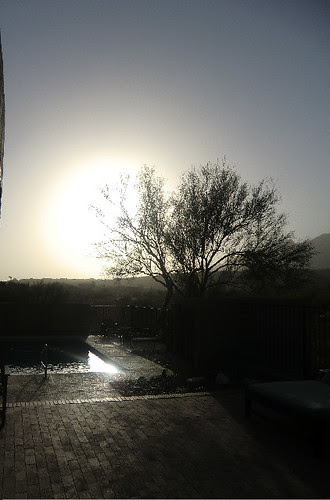 parley view parsnip...., a photo by angryparsnip on Flickr.

My Monday blog about what is happening around my home...

All four fires in Southern Arizona are still burning with small
battles won but really no containment. High temperatures, dry
winds, no humidity and rough terrain all have added to a very tough
four weeks.

In Sierra Vista, Southeast of Tucson, about an hour and a half away by
road, the fire is still burning growing by the hour has jumped the
highway and is heading North. Todays low winds and temperatures of
only 99, will allow the slurry and water dropping helicopters to take
off and help out the crews on the ground.

Sunday afternoon the winds changed from blowing from the East to
circle around and start blowing from the West. The afternoon went
from blue sky to a veil of dust filled air that encroached closer and
closer till all the mountains around Tucson look liked the were
enveloped in a golden fog. Beautiful in a sad destructive way.
Today it is fairly clear, blue sky and the winds have quieted down,
thank goodness !

The above photo was taken late Sunday afternoon when the dust filled
air was swirling all around my home
I tried shooting directly towards the sun which was a white ball
floating behind the veil of iridescent dust and this is what the
camera saw.
The afternoon wasn't this devoid of color in fact it was a lovely
golden color but I rather like the feeling of this photo.

note. . .
A new fire has been spotted near Bear Canyon Lake. The Wallows fire is
about a mile north of the lake.
Another fire The El Camino Fire started by the border is six miles
east of Sasabe.

Posted by angryparsnip at 9:50 AM