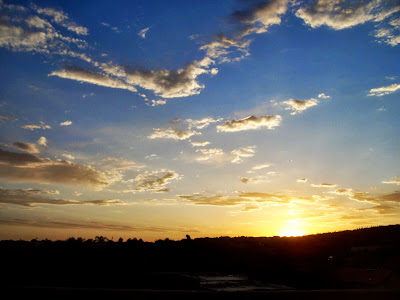 Last week daughter and I drove up to Flagstaff to help son pack-up his apartment and head back to Tucson after graduation.
Flagstaff is in the north and Tucson is in the southern part of Arizona.
On the drive back home you have to drive through Phoenix, what a hell hole of crap.
Can I say that on my blogs ? ? ?
It has become nothing more than an overcrowded  extended neighborhood of Los Angles.
Too much concrete, asphalt, cars and extremely rude obnoxious self absorbed people.
I was taking mental notes on how many people of one group especially was at fault,
Then I realized that they probably never learned any common sense or manners from their mothers and fathers or family.
Some what frustrated I finally got through Phoenix thank goodness and started the lovely two hour drive to Tucson. And it is lovely drive once you get past Phoenix.

The sun was just starting to hang low in the western sky and after  several days of wind the weather was calm. Dust was suspended in the air so it gave the evening a lovely sparkling golden glow and as I passed several miles of lush cool green fields
about halfway to Tucson,

Sitting on the open dirt verge between the highway, fence and the fields was the biggest raven/crow ? I have ever seen. As I was driving about 75 mph I only got a glimpse of this vinet  but a week later I can still vividly remember it all.

The bird was sitting in the open looking west across the carpet of green fields towards the setting sun.
I got the feeling he was just sitting there enjoying the quiet after a busy day.
It seemed so very zen.
It felt like this bird was enjoying the late evening, early twilight as much as I do.
But...
Of course reality set in and I think that the bird was just waiting for the evening to start so that all the bugs and small critter that take refuge in the green fields  from the hot afternoon heat would come out.
Dinner !

But I like to think and will think that this huge bird was really enjoying the beautiful setting sun and the coming twilight.

All I know is that one quick glimpse put me back into a much better mood than I had been in since Phoenix.

Posted by angryparsnip at 2:45 PM