On 20 February the wonderful Evie of the blog The Desert Rocks nominated me for an Inspiring blog. Sorry it took me so long to respond, Evie.
Your book just came in the mail ! Woohoo !
She wrote that " I have a cute blog that gets our mind off the stress of publishing.
She's  Mom to of two of the cutest Scotties ever and makes far off places sound very exciting"

The Square Ones thought this very true (of course) they are super cute and took all the credit and then wanted some chkikin' strips.
yert !

Evie that was a lovely thing to say. Thank You.

I have not thought myself in anyway inspiring.
As a Women and a Mum I live and try to do my best everyday and that's about it.
I try to treat people the way I would like to be treated.
I am responsible for my actions, I don't lie, cheat or steal and work to conserve the land  for the animals living on it and people.

I was meme  once when I just started my blog and instead of writing about the things I like,  I turned it around and wrote things I am proud of, that are me.

So today I will follow the rules and write about what inspires me.
About a zillion things.

Of course I live in a most beautiful place, every morning I wake up is a joy.

My family and friends who stand by me no matter how many daft decisions I make.

The Square Dogs who love me no matter what I do.

Blog friends who open new doors of me.... but why are you all writers ?
I am sure you all cringe when reading my dangling participles and verbs who hang around to long drinking beers and eating nachos !

Two special blog friends who have just lost their beloved husbands and with great strength have gathered up the pieces and most important live everyday with love !

Two very close friend who have faced bone crushing sorrow and who have somehow found the courage to not give up and care of what is left of their families.

Most important my Mum who was a lady and gave me the strength to face my trials and sorrows .
But
I think what really inspires me are my Grandparents.
My Grandfather and Grandmother made their way across Europe from Poland, the Atlantic Ocean, New York and made their way to Chicago.  At a time when you had to pass a health check and have a sponsor  or a job waiting for you.  I can't even begin to imagine  what a journey that must have been for them.
They legally put down roots in Chicago and became  citizens.

He understood that being a LEGAL immigrant first and then becoming  a citizen of the United States was the best way to support his family.
He became an American of Polish decent. 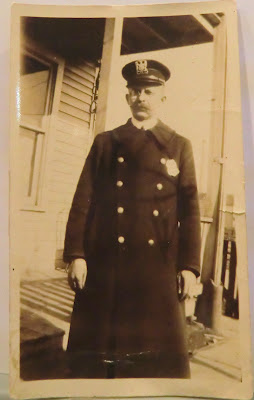 He was proved right.  Everyone of my Aunts and Uncles were successful in some way.
From an Uncle who designed and worked on the electrical systems of the first US aircraft carrier to the Uncle who owned one of the largest uniform, laundry service in Illinois.
One Uncle was a solider and fought in some of the worst battles in WWII and liberated concentration  camps. He never ever  talked about it.
This huge bear of a man would later managed a local bar and was a friend to everyone.
An Aunt who was a feminist before there was a word for it. Bucked convention and was a talented  tool and die maker which was at that time a  "mans" job !
My  Mum who became a book keeper and even though almost blind before she died still wrote the most beautiful numbers and did sums in her head.

My Family was successive  because my Grandfather had a dream and pursued it legally.
He chose to do the right things through adversity.
He followed the laws of the new country he wanted to become part of.
Not circumventing the system and the laws as we see here everyday and turn a blind eye to. No tears and excuses but an responsibility and  understanding of what is right and
wrong and he was proved to have made the correct decision.

He lived and treated people how he wanted to be treated.

So Thank You again Evie for giving me the opportunity to to look back at my family with love and realizing that for me,  my family inspired me to try and do my best everyday.

Some days I fail and some days I succeed but everyday I try.

Posted by angryparsnip at 12:30 PM