If I ever get pancreatitis (heaven forbid !) I want to go to thehamish's doctor.
Five days and he is home.
As you know (Friday's post) we rushed thehamish early Wednesday morning
to the ER of the Veterinary Specialty Center in acute distress.
I thought he was having a diabetic seizure.
Turns out he was in a full blown Pancreatitis attack. Scary time.
.
I really like their lobby with a
Gug Dug and

.
The second day he was there I went to visit him.
He was very out of it and he hobbled over to the hall door and stood there.
He wanted to go home. It was very heartbreaking.
. 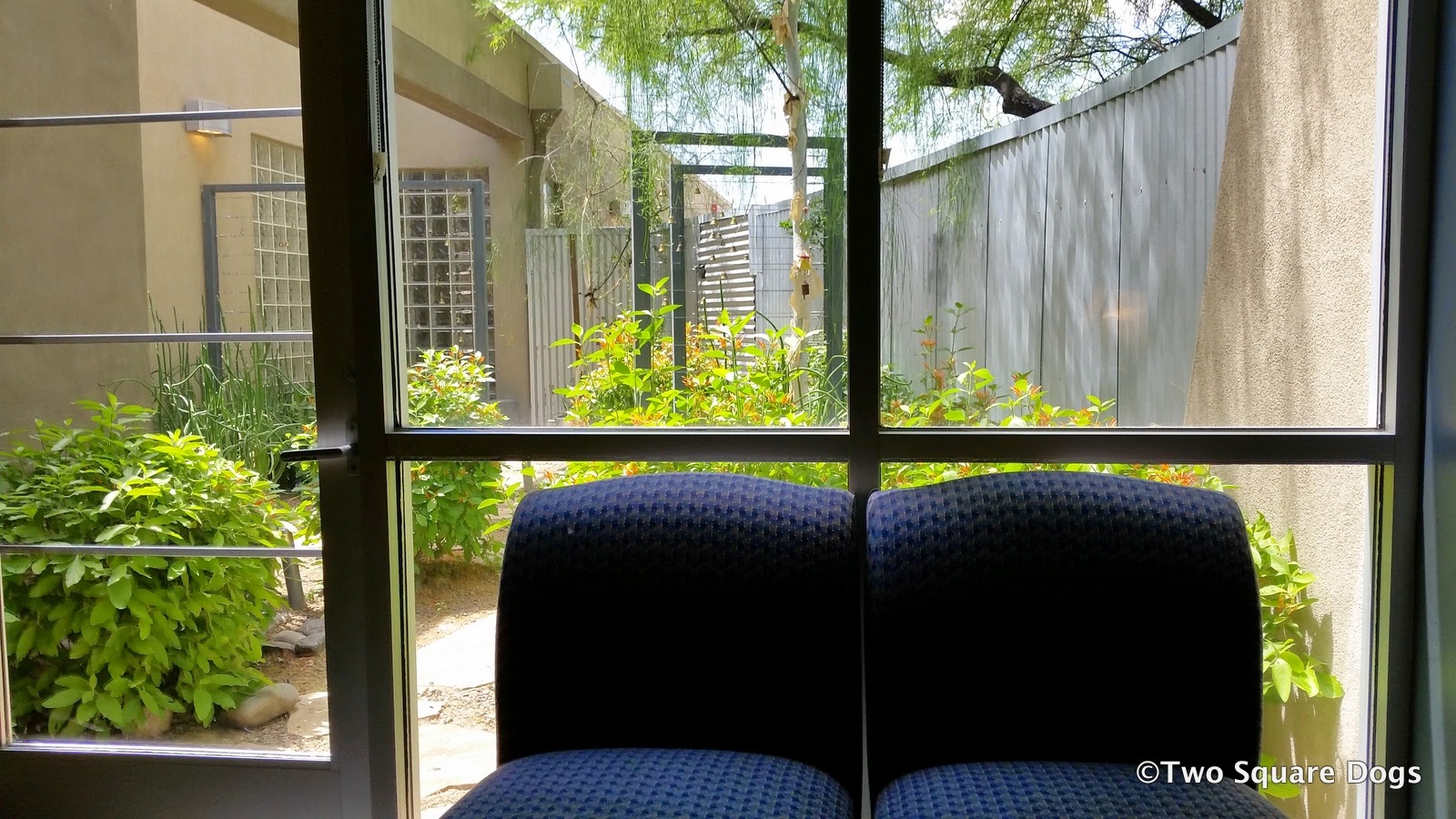 I let him stand by the patio door and sniff the breezes but he was too tired.
They had to carry him back to ICU,  a few steps were too much for him.
. 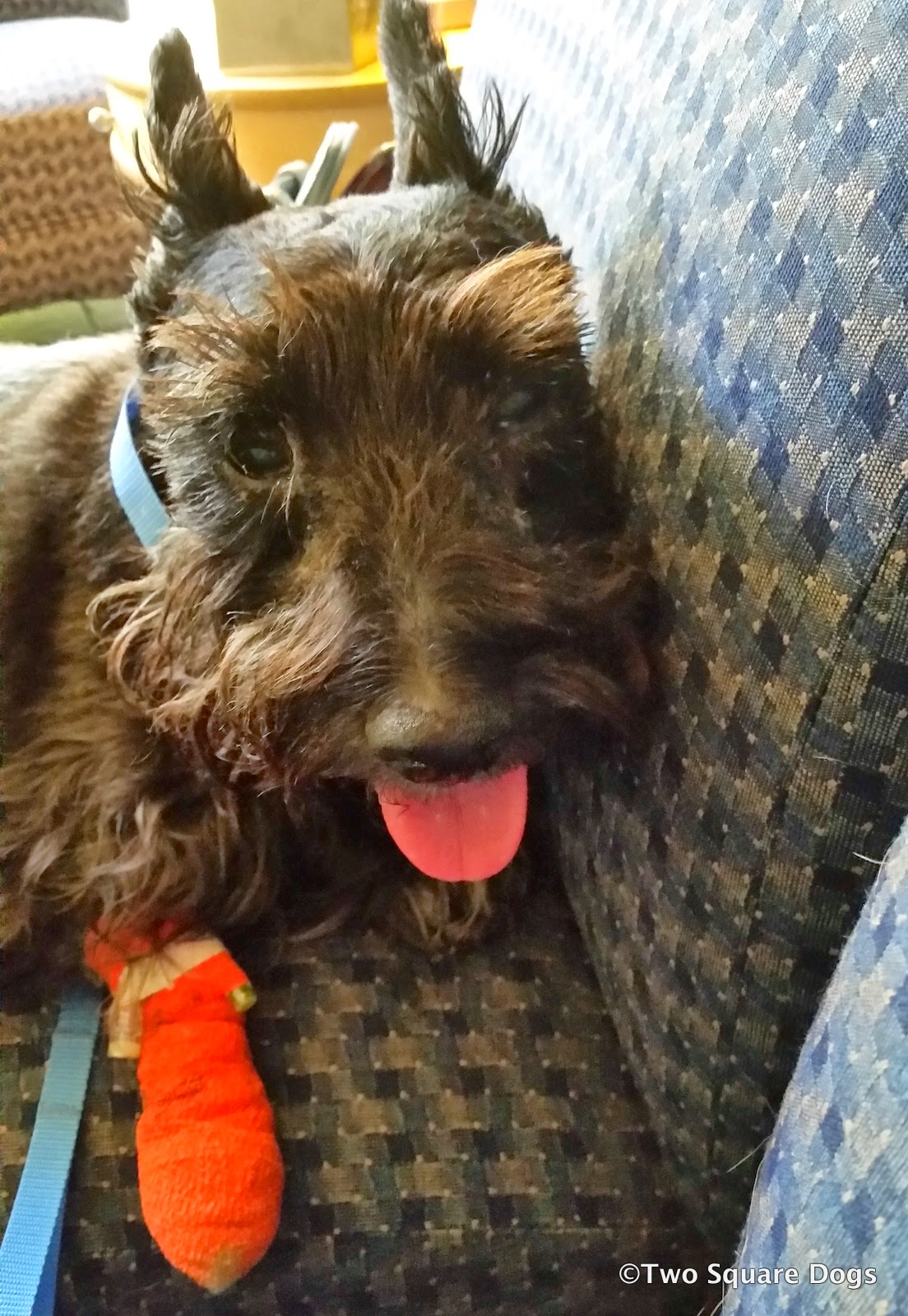 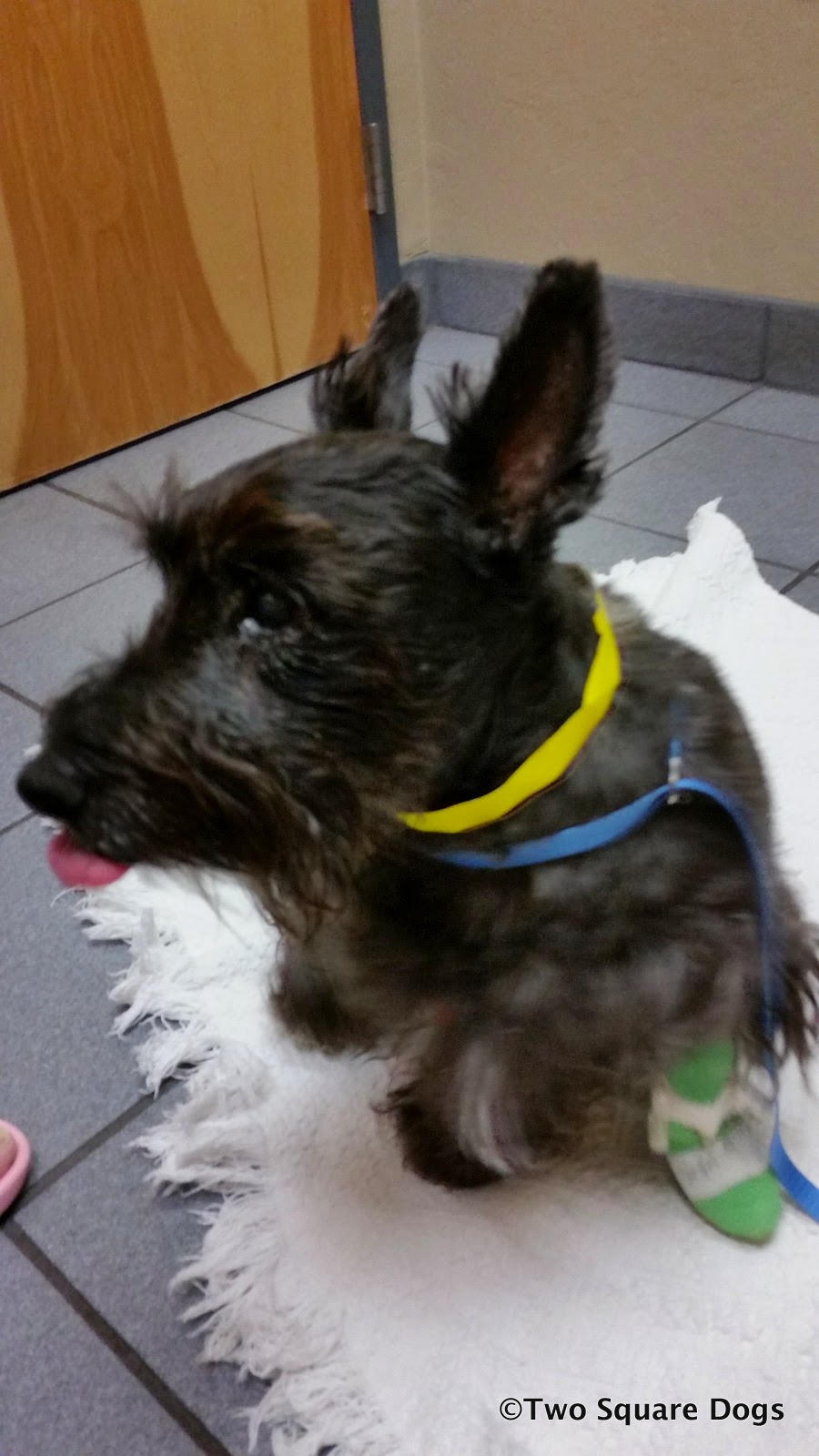 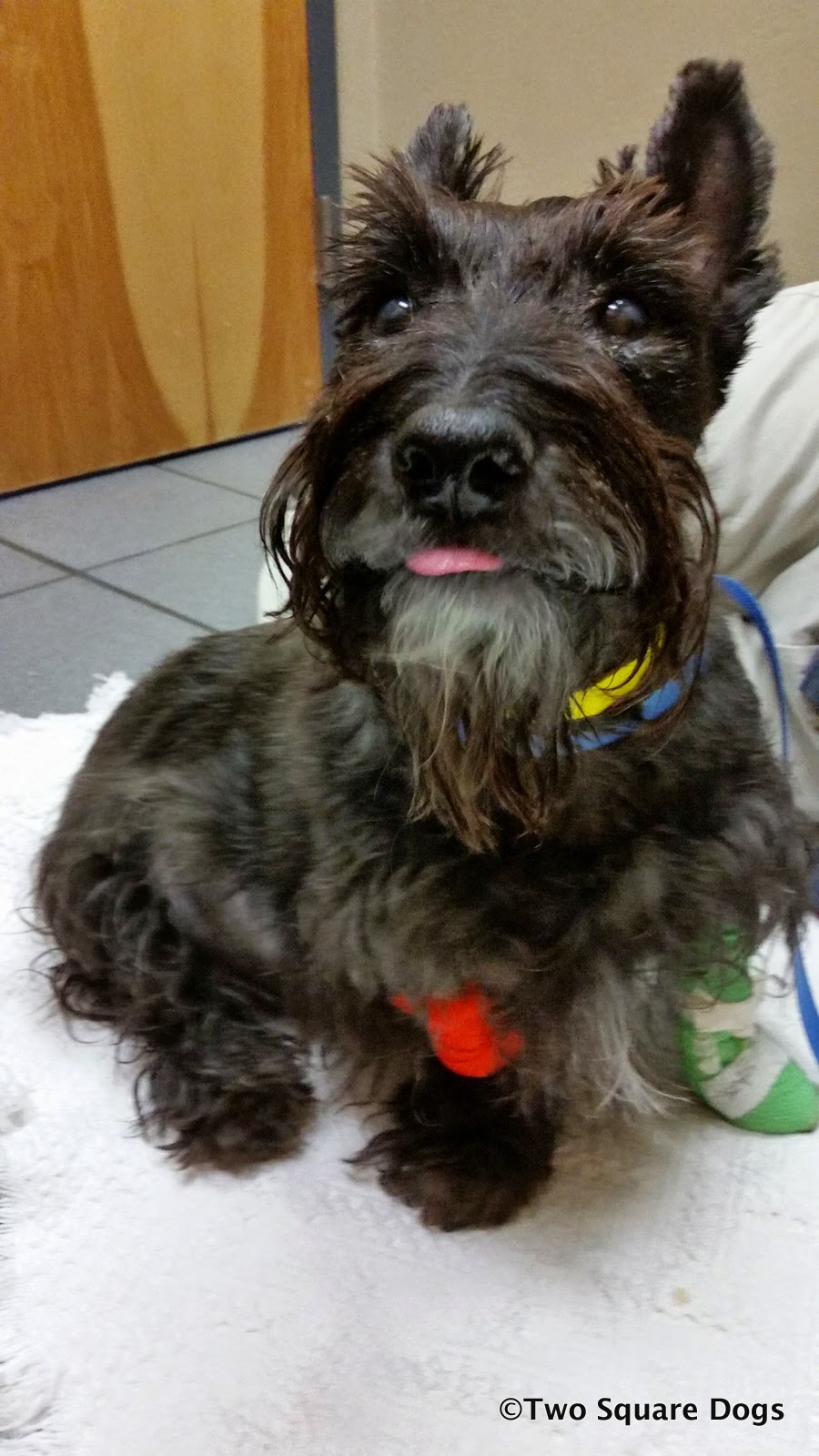 But if you could have seen him he looked like he was living rough for a week
He is one photogenic dog. I called his name and he played to the camera.
I just can't believe this photo.
.
Sunday late afternoon he came home.
Watson was very happy to see him. 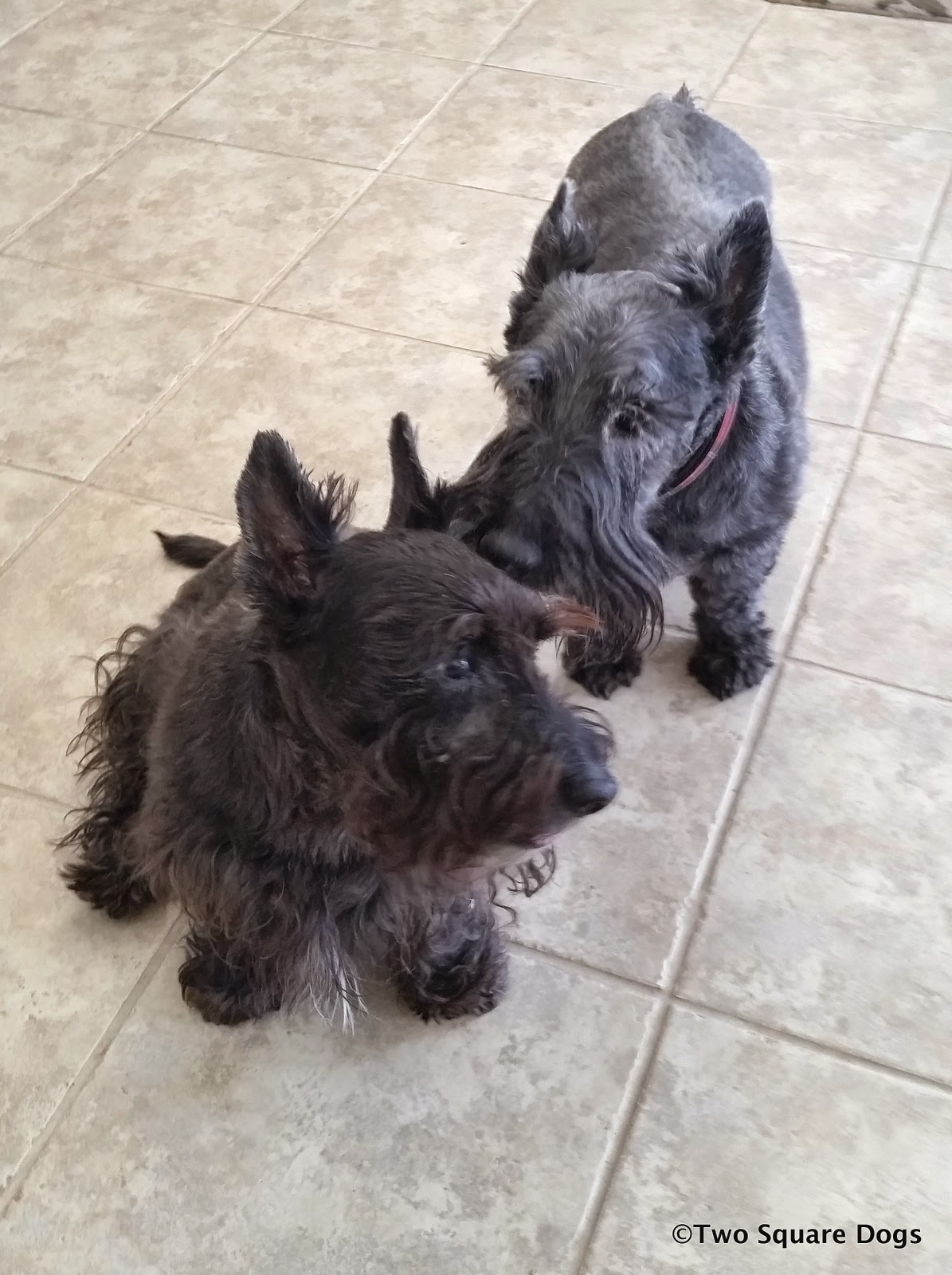 Lots of sniffing going on. 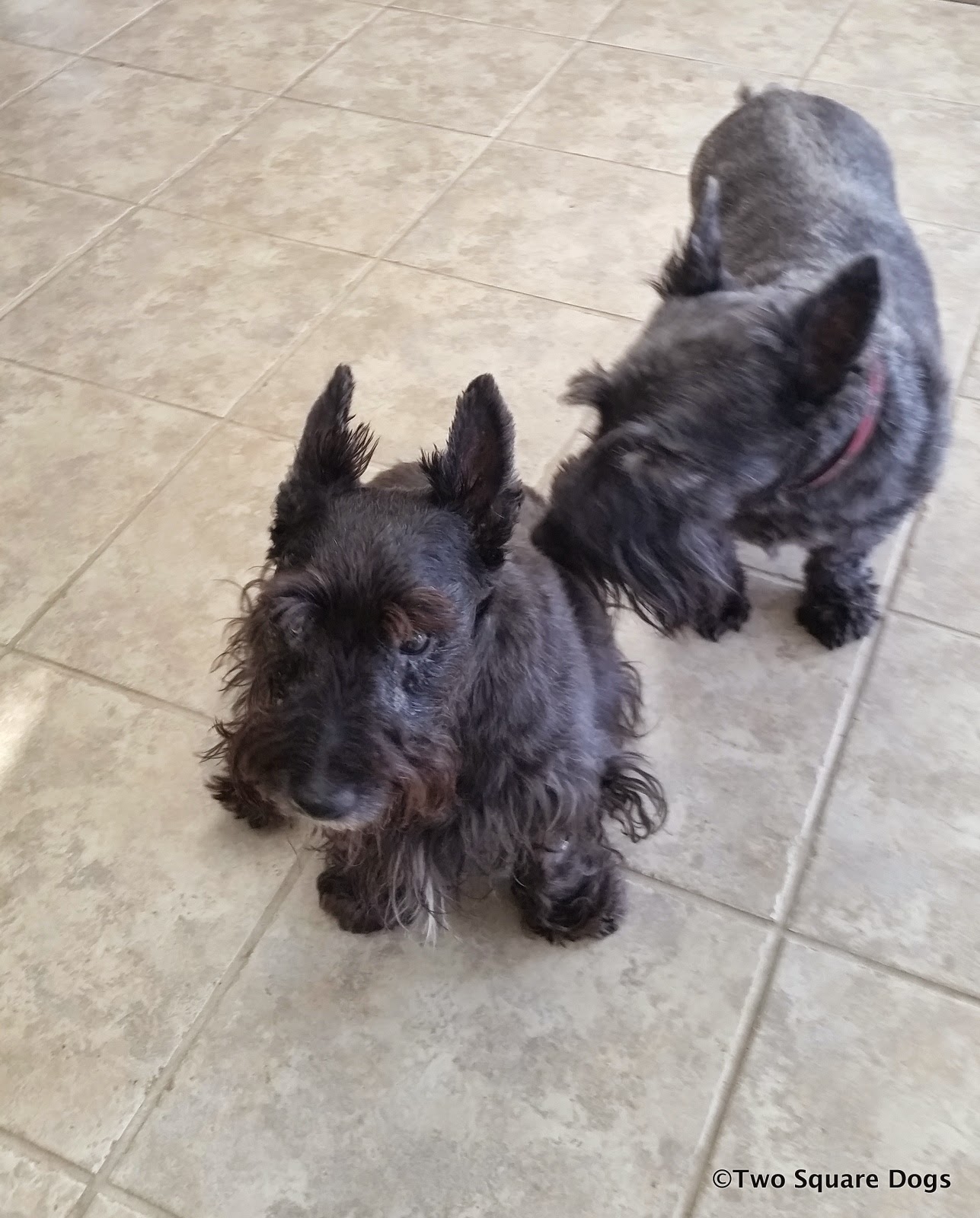 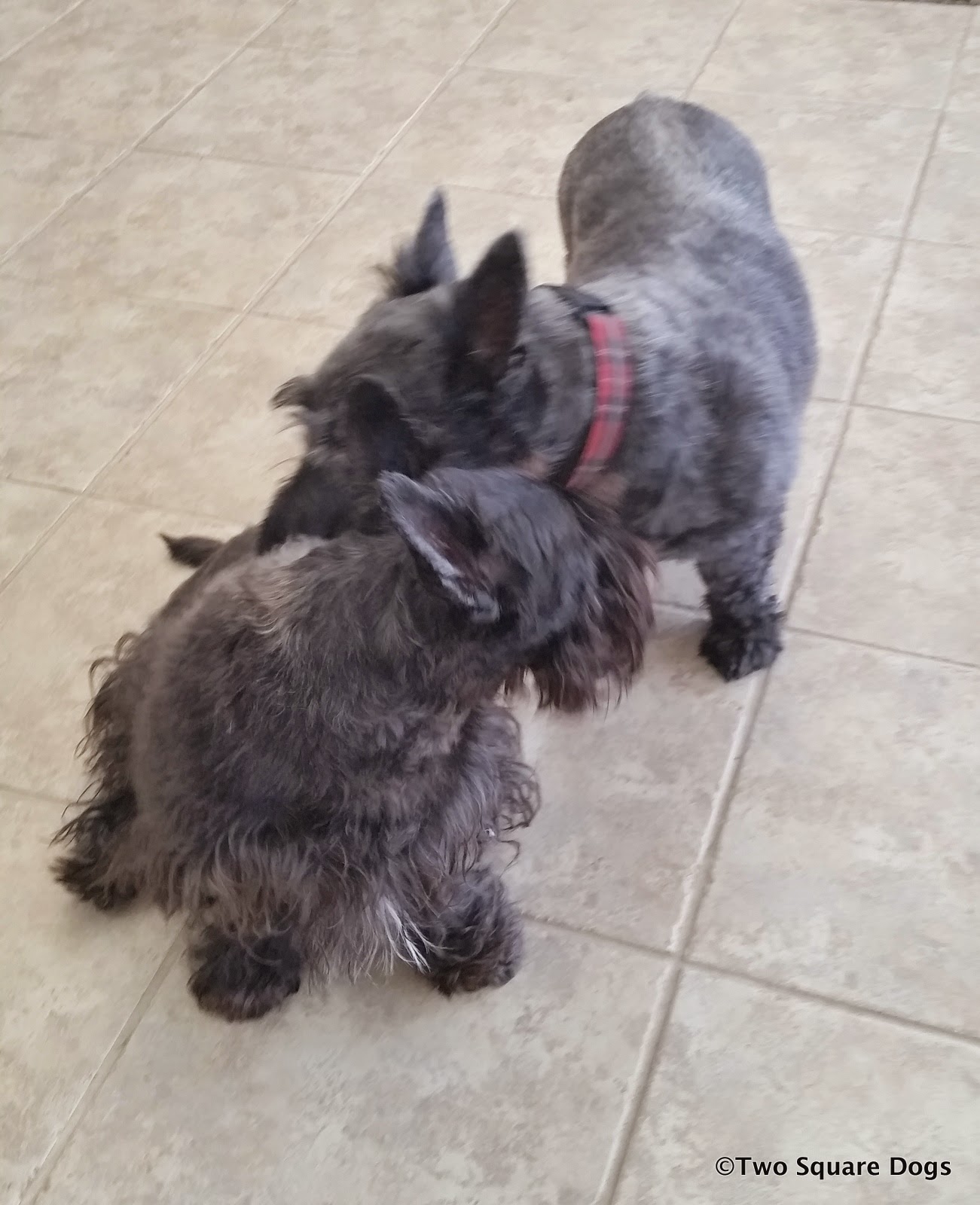 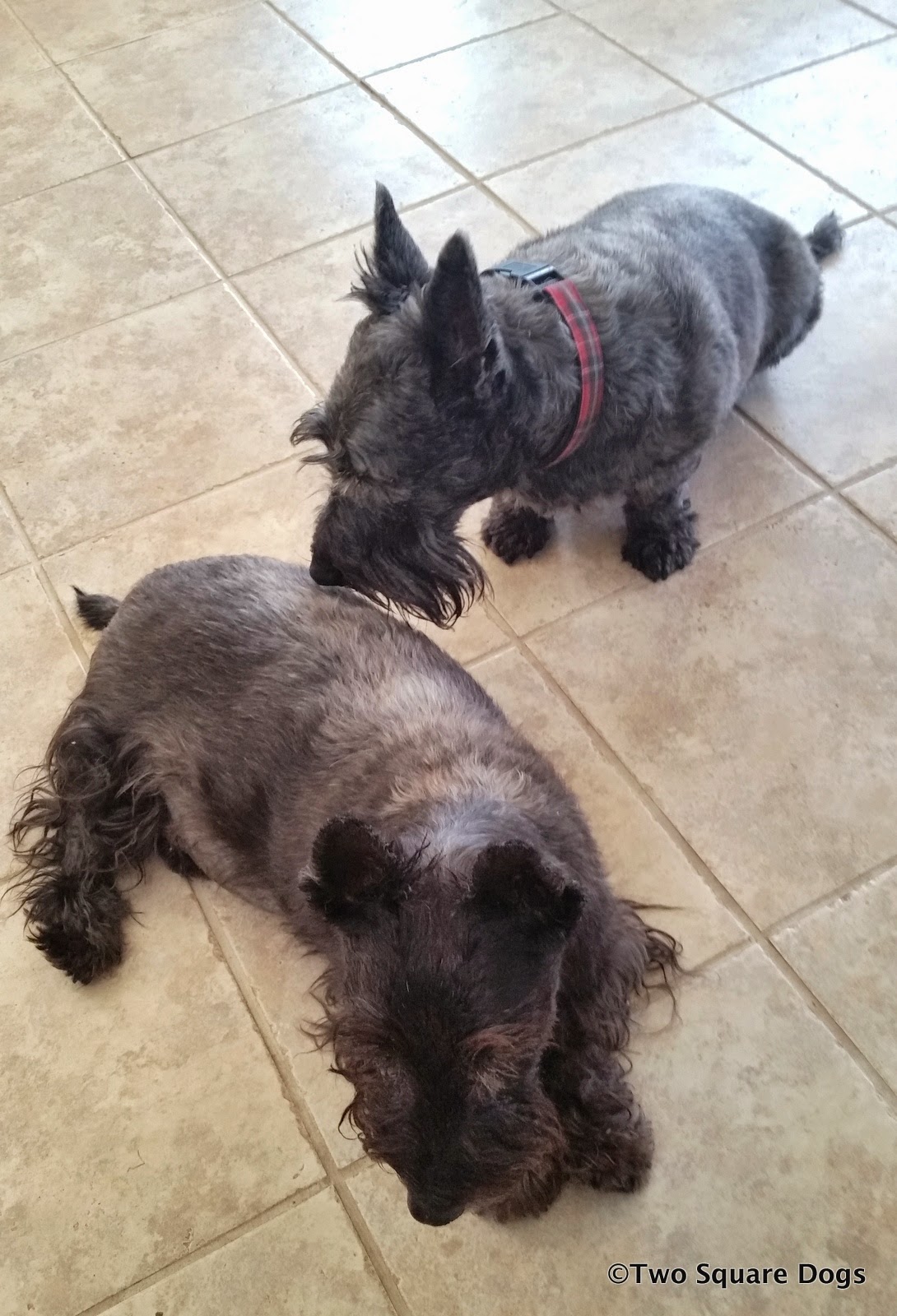 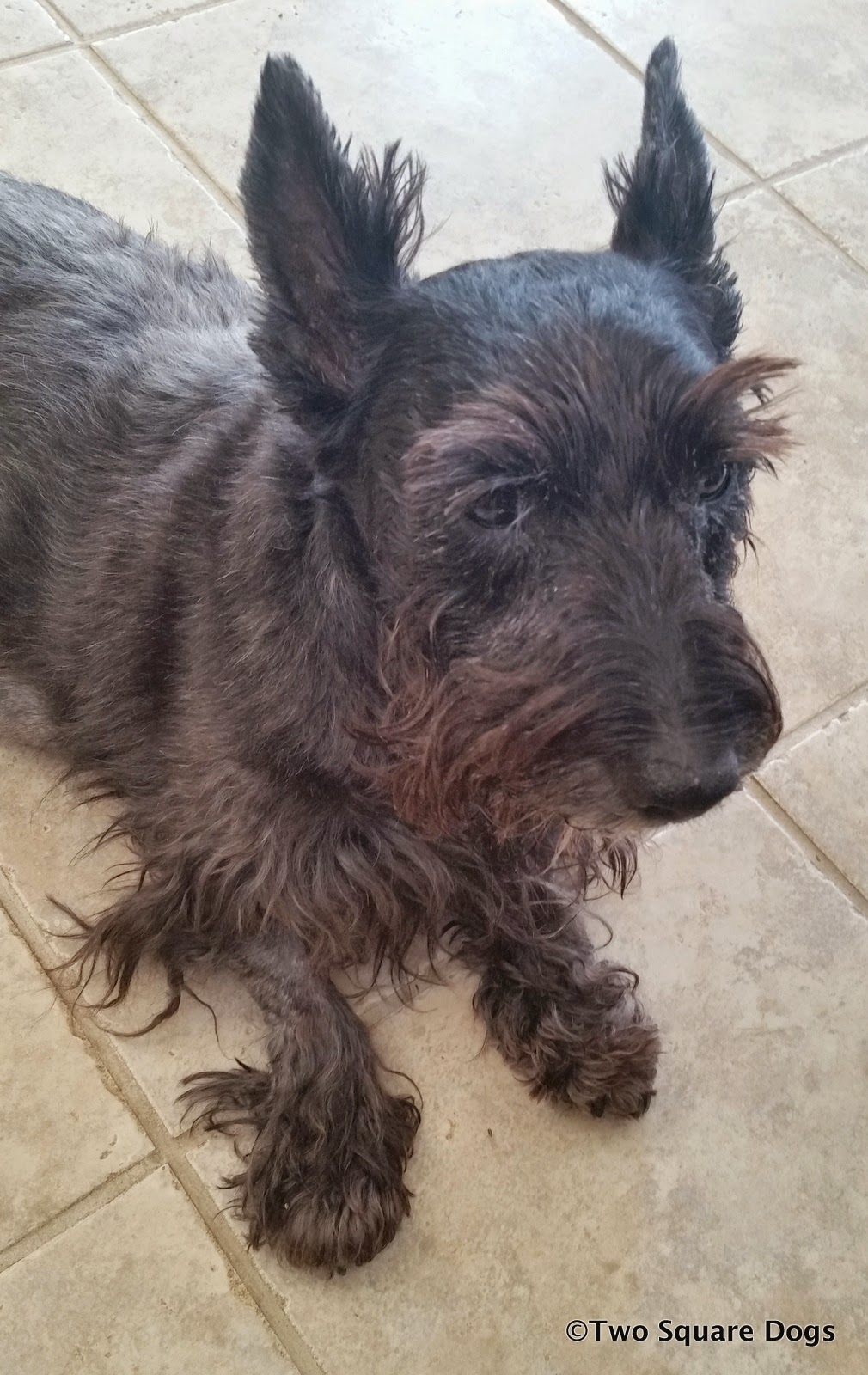 He now has a ugly poodle cut on his front two legs,
from the IV's and the  blood draws.
Of course Son calls them Chicken Wings.
, 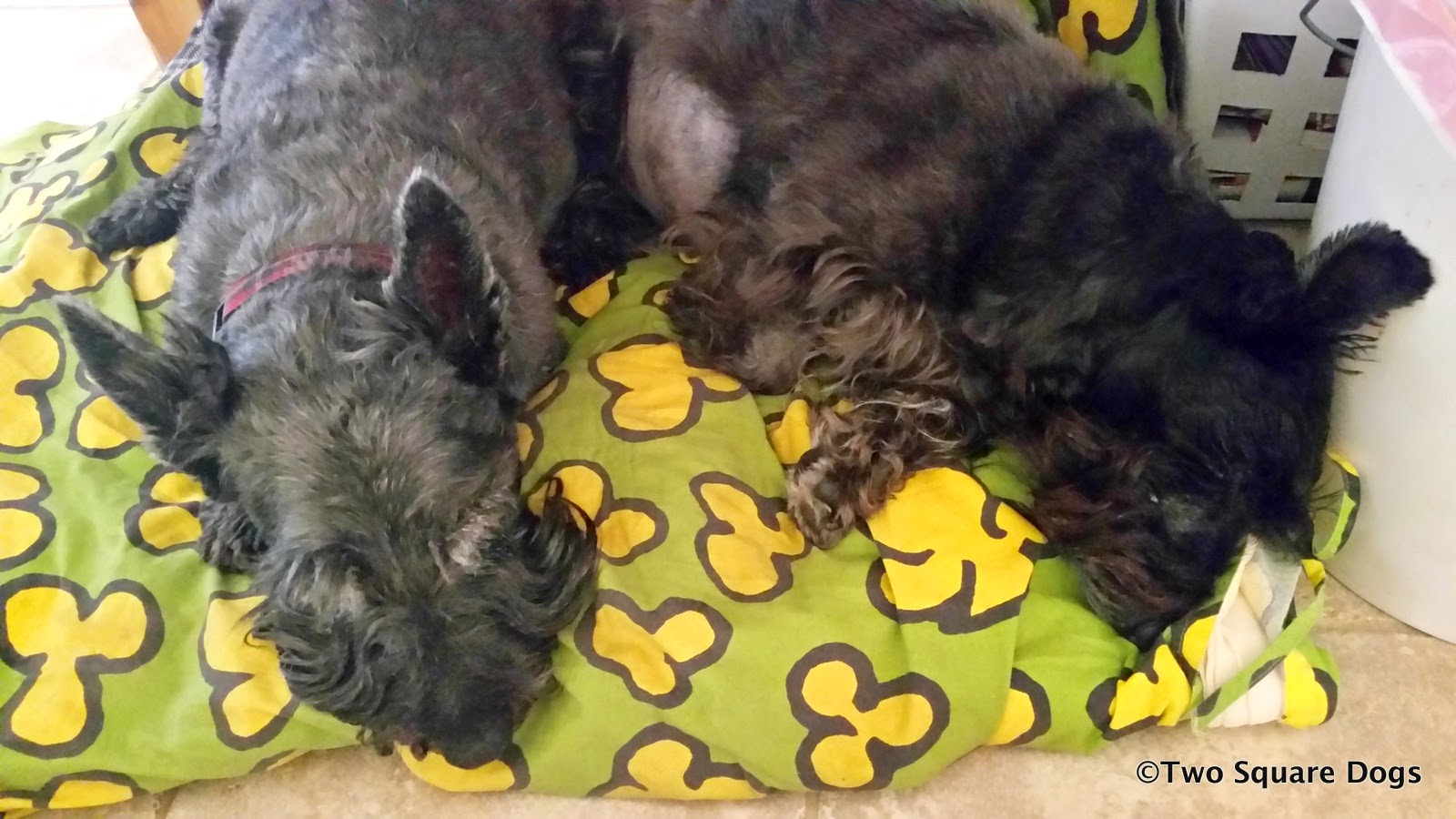 He is asleep with a shaved tummy, poodle legs and Watson under my work table.
.
He now has to eat a canned food special diet and I have a prescription for it !
It manages his pancreatitis and bladder stones. It is very low fat.
I still can feed him the very plain chicken I cook for both dogs.
Along with the carrots and green beans.
I have always been very careful with what they eat. But with thehamish no matter
what I do he seems to have major problems.
His diabetes affect's his other organs. It is like dominoes bladder, liver, spleen and now pancreas.

I always thought Watson would leave me first.  He is 17 now, deaf and has dementia.
But in the last year I have been thinking more and more that thehamish could
leave us first.  It is very hard.
....
And just because I can here is your pretty for the first of the week.

Newest photo of the Century Plant. The branches are growing bigger.
Sunday early morning a storm blew in bringing rain some some high winds
that did some damage to my yard.
. 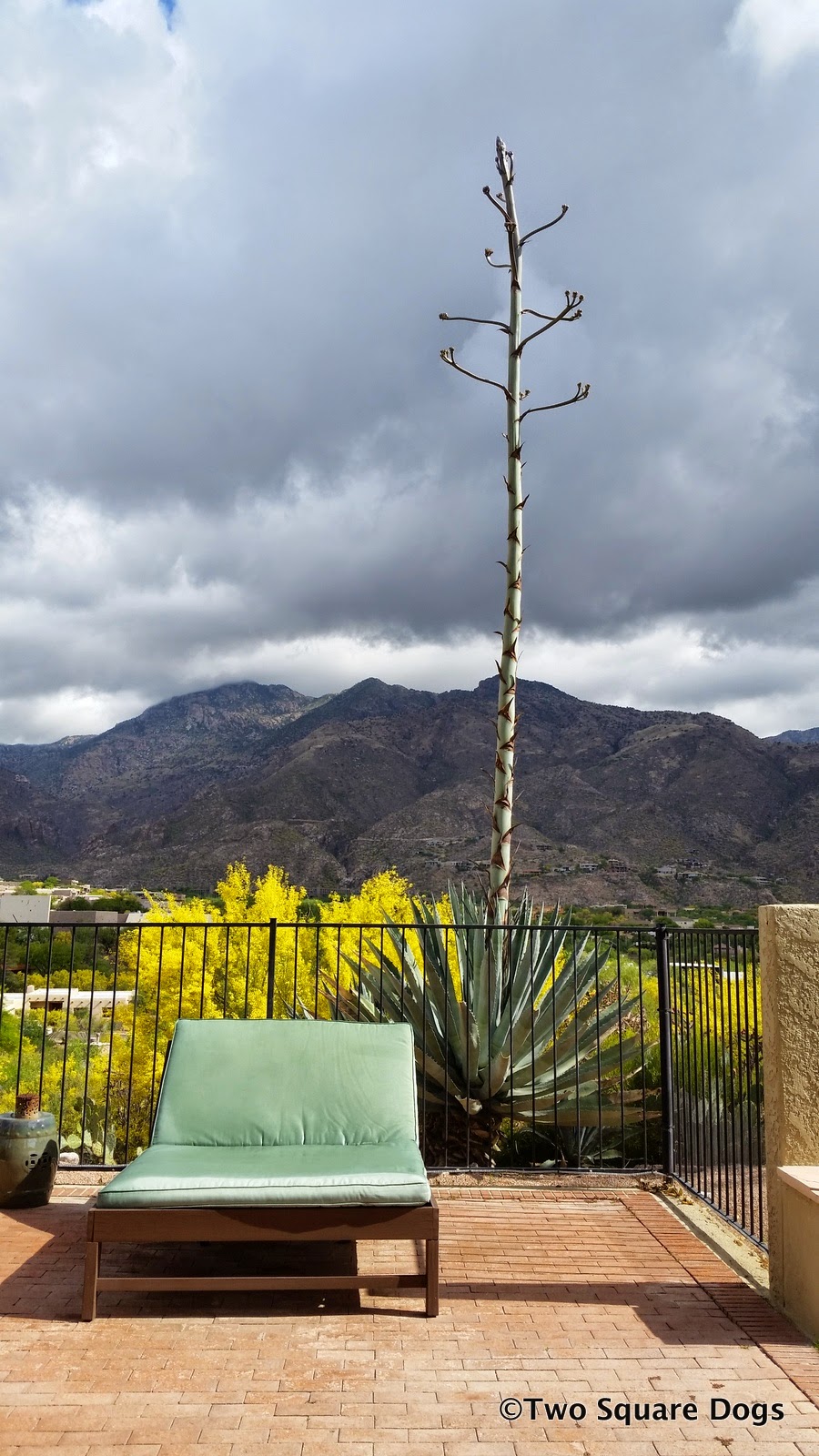 Update:
I wrote this Sunday night. He ate a little and slept a lot.
Monday morning he only ate a small amount and is now asleep.
I am off to the dentist, argh ! will see how he is when I get back.
Time to call the doctor.
Posted by angryparsnip at 10:18 AM