I like leftovers.
There are the food kind. The wonderful meal reheated the next day, so much better.
Maybe chopped up and add to a soup, stew, a savory turnover, ramen or a rice bowl.
The leftover scraps of material made into a stuffed toy for a child or gud dug.
Paper scraps torn, cut and glued to make a card to send to family and friends.
Then there is the leftover photos that really don't seem to fill a post by themselves
but put together for leftover post today. 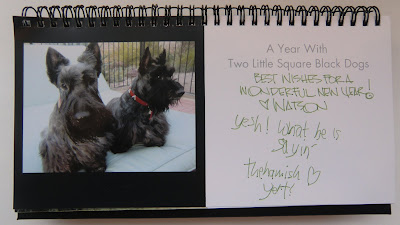 This years calendar for family and two friends, who I knew would love to have
The Square Ones all year.
After I sent this off to the printer I though why didn't I write a little story
about each photo ? 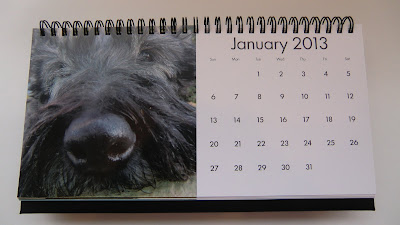 January
Watson is the most beautiful dog very friendly and loves everyone.
But he does not like to have his picture taken. Ever !
So it is always very hard for me to get a good photo of him.
One day I was in the pool and as always The Square Ones will lay down and nap.
I was able to get a nice head shot of Watson pool level before he turned his head. 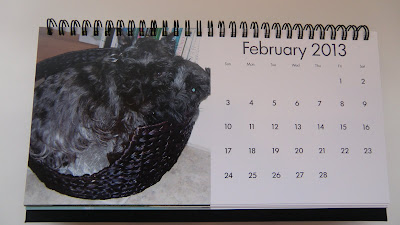 February
The Two Headed Dog Of Tucson
thehamish is very attached to me but his touchstone is Watson.
Poor Watson puts up with a lot from him.
About a month after my move as I was unpacking boxes and putting books away in the library.
I looked down to see Watson trying to nap, in what I think is a too small basket but
The Boys love it.
There was thehamish smooched in, while Watson as always just let him.
I think it took them some time to adjust to the move and thehamish as always needed some extra help. 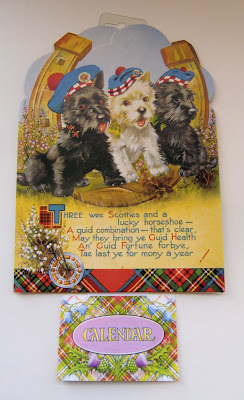 Is this not the most perfect Calendar for me ?
Wonderful blog friend Elizabeth of several fabulous blogs, was sent this from a friend in the UK.
When she and a friend looked at it they both said The Square Ones.
She sent it to me and I waited and waited and waited and almost two months later in the mailbox after I thought I would never see it.... There it was !
The stamps were not cancled and it was in perfect condition.
Where or where did it go all that time ? 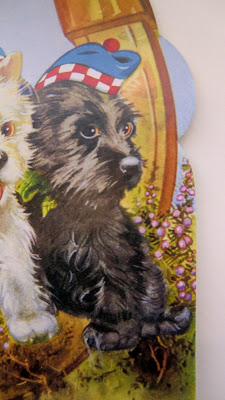 Close up of the Scottie that looks just like thehamish when he has done something naughty
and hopes I will never find out about what he has done. 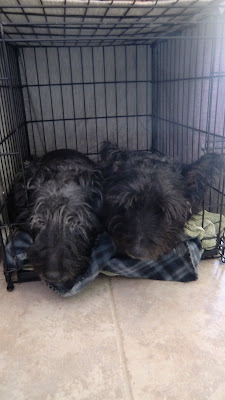 Today, The Square Ones are in The crate together.
thehamish has been very naughty again
and I think is trying to be as invisible as possible. 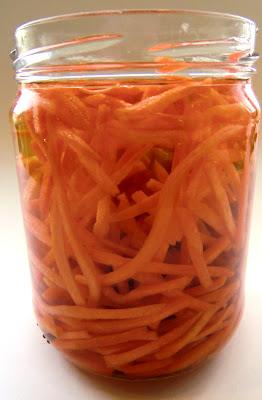 I made some quick Japanese pickeled carrots.
Wonderful on salads, sandwitches, chopped on rammen or a rice bowl. 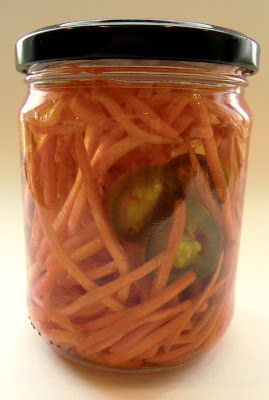 I also threw in a few slices of a pepper.

And just because I can....
Here is your pretty to start the week 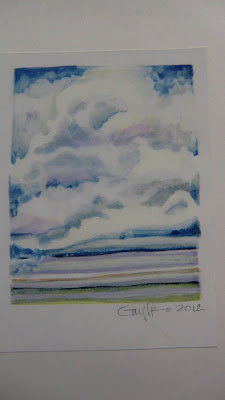 A watercolor and pencil sketch sent as a birthday gift.
I don't know why this photo is so dark ? when I posted it to blogger it was so much brighter.
Will try to post it again.

Posted by angryparsnip at 11:14 AM