Mock Squid Soup: Bunny Lake is Missing
My trivia questions were
1. It is a very old Black and White movie.
2. The book is set in New York but the director moved
the movie to London just because he could.
3. The Zombies three songs were and important part
of the movie.
..... 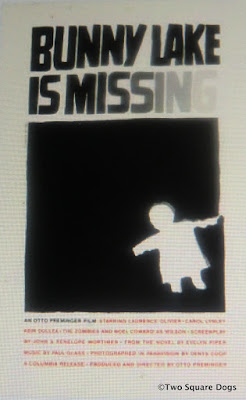 Directed by Otto Preminger, 1965
.
When I watched this movie back in the 60's this what a scary movie was.
No slashers, mass amounts of blood or chain saw wielding  deviants.
And although Zombies are in this movie they are a very a handsome
and talented 1960's rock band.  le sigh

Bunny Lake is Missing feels very 1960's European to me.
Very austere, dark, shadowy, just a little off center.
Everyday places that would seem charming
or quaint come off somewhat  terrifying and odd.
A psychological mystery filled with conflicting clues and a
unexpected ending.
The terrific movie score by Paul Glass
adds to the movies mood with a whistle and flute.
.
A single mother Ann Lake, has just moved to London,
where her brother is living, with her daughter Bunny.
When she goes to pick up Bunny after her first day at nursery school,
no one has any record of the child being registered
and no sign she was ever there.
The police are called in and they can not find any trace of Bunny
even at Ann's apartment.
Everyone starts to wonder if Bunny is just a fantasy of Ann's
because there seems to be no evidence of her existence.
Ann's brother seems to back up the police 's suspicions.
When Ann was young she had an imagery friend called Bunny.
Ann seems to be a mentally disturbed person.
All the clues and evidence lead you to believe that Bunny does not exist.
Ann Lake is played by Carol Lynley
Steven Lake is played by Keir Duller
Superintendent Newhouse is played by Laurence Olivier.
Fabulous !
.
Otto Preminger moved the story from New York to London
where he liked working.
The Zombies had three songs in the movie/soundtrack.
Remember You, Just Out Of Reach and Nothings Changed.
The band is playing these songs on the TV in a pub where Ann is talking to
Supt. Newhouse. And also on the radio when Ann escapes from the hospital.
I was a huge fan of the Zombies !
.
And now to the opening credits.
Saul Bass !
If you don't know by now I am  huge fan of his work.

Stop at 2:02 or you will see the closing credits that tell you the ending.
.
.

.
Saul Bass work always looks so simple so effortless.
According to Steve Fuller,  'The movie is about an emotionally disturbed person
involved in the disappearance of a child.
To hint at the characters state of mind
a hand tears shapes out of a black screen.
The torn edges are jagged and helps set the mood of the film.
It ends with the shape of a a girl being torn out of the paper.
No color no edits and no tricks just raw emotion" .
Then the hand rips open the last paper that leads directly
into the long single shot opening scene.  With a major clue.
For me, an art student and freelanced artist, movie opening credits
and movie posters told so much for a movie, unlike today.
They brought you in and when done right as in Bunny Lake Is Missing
set you right up and drop you straight into the movie.

I saw this movie at lest 45 years ago when I was much younger.
It has stayed with me all that time.
A mother looking for her lost child and no one believes her.
The haunting feeling of lost and everything
not quite being what it seems.
Today the newspapers are full of children missing,
video on every newscast and breaking news.
But it was a completely different time when this movie came out
and it has stayed with me. The perfect storm of emotions.

If your thinking of adopting a dog, cat, bunny, horse or chicken
check out your local shelter.
Happiness can come on four legs  or even two !